Introducing Lindsey Burks! Our April MVP at Jefferson City CrossFit! Lindsey has been an inspiration to so many members. She is a hardworking mother inside and outside of the gym and it shows! She has signed up for several CrossFit competitions and is ready to compete in the Capital City Throwdown next! Read more about this phenomenal woman who we are blessed with to have as part of our community. 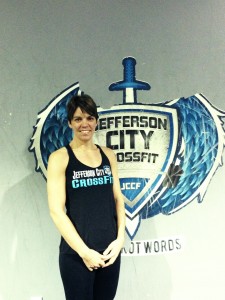 How long have you been CrossFitting?: I started CrossFit in September 2013 at the “baby” box.

What time do you come to WOD normally? I am generally part of the 5am Rooster Crew, but will occasionally make it to an evening class

Favorite Lift: Deadlift…I feel so strong when I deadlift

Favorite Gymnastic/Body weight Movement: I am working hard at my pull-ups.  I finally am able to do one, sometimes two…my goal is 5!

Tell us some about your journey, greatest accomplishments. What makes you keep coming back?

I started CrossFit in September 2013, after buying a Groupon Coupon.  I didn’t expect to like CrossFit, or stick with it after my Groupon expired.  I had tried many other approaches to fitness prior to CrossFit and got bored after a couple of months…I fully expected this to be the same.  But, I fell in love with it.  It doesn’t seem like exercise.  It is something I WANT to do…it’s not something I feel like I HAVE to do.  I love the variety.  I love seeing my gainz J, and I love the community.  Chad and I made the decision last year to train for a half-marathon.  Our race was in April, and we began our training in January.  For those of you that know me well – you know I don’t enjoy running….so CrossFit was my training.  And, believe it or not, I finished the half, and finished it a lot better than I anticipated.  Shortly after that, Chad and I stopped by the box to watch some  of the Capital City Throwdown Competition, and I decided right then and there, that I wanted to try a CrossFit competition.  So, in August last year, I did my first competition, and have done 2 others since.  I am beyond excited to be competing in CCT2 in just a few weeks!! If you would have told me a couple of years ago, that I would compete in fitness competitions, I would have laughed you out of the room. I love CrossFit, and can’t imagine being a part of any other community than JCCF Nation!

If you could give any advice for a person new to CrossFit, what would it be?: Stick with it.  If you put in the effort, you WILL see results!