Introducing Steven Hoffman, Jefferson City CrossFit Athlete MVP for January 2015! This guy has grown mountains over the last 12 months, from doing his first competition ever at Capital City Throwdown in April 2014, followed with a couple others this year. One of my favorite memories as mentioned below is when he dressed up for the costume portion of the Journey for Josiah fundraiser as a Grandpa. Bald head on top, frumpy sweater, and a walker with tennis balls at the base. He slowly scooted over to the wooden rings, dusted off his pants and jumped up to do a muscle up. It was epic! 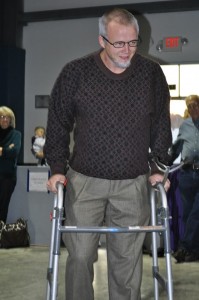 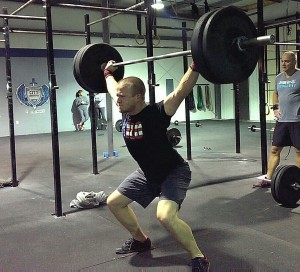 Steven we are grateful to have you as part of our community! I feel strongly the day you and Josh walked through the doors was one of the best decisions you have made in your life. Keep up the hard work, and looking forward to a year of 2015 goal breaking!
Name: Steven Douglas Hoffman
Age: 24
Family:  I have my dad, Carl, mom Cindy, and my little brother Lucas.
How long have you been CrossFitting?:
I started at CrossFit Como in August 2013 with Josh Odom.  Then we moved to JCCF in September.  I would say that I was less than present for the first couple months though.  So I would say I really started in December 2013 or January 2014.

What time do you come to WOD normally?
Mostly at 5:30 with some 4:30 and 6:30 sprinkled in there.  Definitely try and get in on the weekends too.Favorite Lift: snatch.  I like it because it’s so complex.  Getting under that bar is so gratifying.
Favorite Met Con: Double Unders
Favorite Gymnastic Movement: Handstand push ups and muscle ups.

Tell us some about your journey, greatest accomplishments. Like what was your reason for starting, why you stuck with it? What makes you keep coming back?
I started crossfit because one of my friends in Columbia was doing it, and I wanted to give it a try.  I almost saw crossfit as competitive working out.  I also needed a change of scenery from the boring ole YMCA up the street that I was a “member” at and “went all the time to”.   With JCCF I didn’t have to think “oh what do I want to do the least today and I’ll stay away from that” (it was always legs haha).  I just show up to the gym and boom, workout done, it’s easy peasy.
I come back everyday (rest days and a couple meh days not included) because the workouts keep me growing physically, but most importantly, the trainers and people keep me growing mentally.  You may not know someone very well, but they are just as supportive as someone that you’ve known forever.  The atmosphere at JCCF is unlike any you’ve ever seen and it’s mind boggling that I get to workout there.

If you could give any advice for a person new to CrossFit, what would it be?:
There’s only one thing that I need to say to new members, just get your tookus in the gym and watch yourself grow physical and mentally.
Favorite Quote:
“Success is not final, failure is not fatal: it is the courage to continue that counts.”-Winston Churchill.
I’ve got some pretty good memories already with JCCF, including but not limited to doing muscle ups as a grandpa, to hitting a 200+ lb snatch, to being there and being told my best friend was engaged to the love of his life!  And here’s to many more!